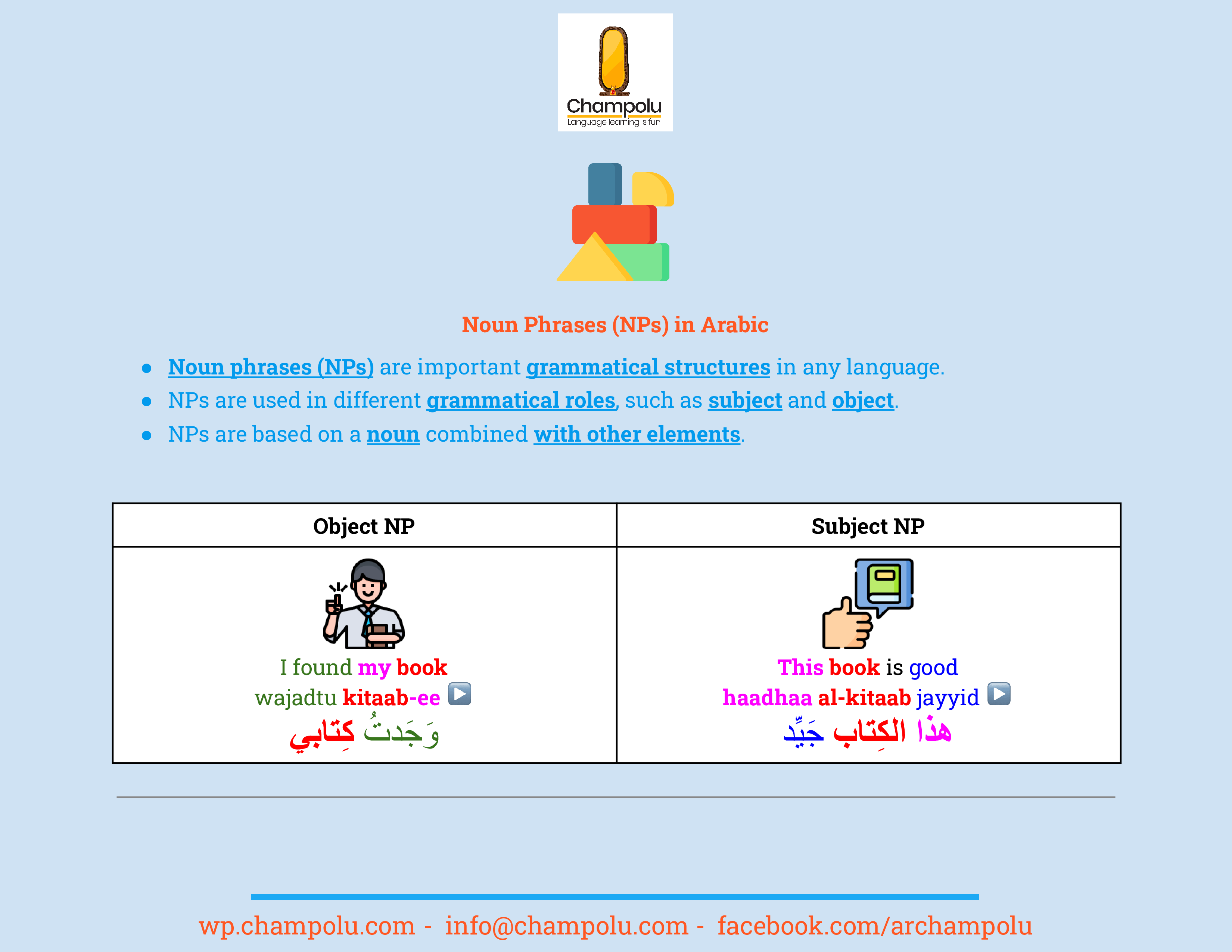 Learning noun phrases in Arabic (or in any language) is a crucial part of building a sentence. A noun is a word that refers to an object, person, or concept. Therefore, a noun phrase is a structure that is based on a noun. In this lesson, we will learn how to build and use noun phrases in Arabic, together with 5 grammar topics that we will go through in the next 10 minutes. You can listen to all examples marked with an audio icon on the interactive lesson.

Suppose that you have the noun “book”, there are different ways of using a noun phrase with it. For example, you can say “a book”, “the book”, or “this book”. Also, you can combine it with an adjective, such as “a new book” or “the old book”. In terms of possession, you can use a possessive pronoun such as “my book/his book”. In addition, it can be part of a genitive expression, such as “The teacher’s book”, “the law book”, or “the book of grammar”.

The bottom line is that: noun phrases in Arabic are essential parts of the sentence. However, understanding and using them usually spans different grammar topics. Such topics include: definite and indefinite nouns, adjectives, demonstratives, possessives and genitive expressions. Luckily, we cover all of these topics in our course “Basic Arabic Grammar” on Udemy.

For now, let’s start practicing how to build simple noun phrases in Arabic. Here are the examples for the five types of structures, corresponding to different grammar topics.

Notice that there are five types of noun phrases we are using here. The first is single noun, whether indefinite or definite (preceded by al- ال). Then we have noun phrases combining nouns and adjectives. In this case, it is important to also notice that if the noun is definite (i.e. has al- prefix), the adjective has to have al- prefix as well. Then, we have noun phrases with demonstratives (e.g. this), and in this case the noun has to be definite, and consequently the adjective, if any.

The next type is noun phrases with possessive pronouns (e.g. my/his), where the word itself has to be indefinite (without al- prefix), but grammatically it becomes definite by adding the possessive pronoun/suffix. The last type is for genitive expressions, indicating that something belongs to something or someone. In this case, the noun for the thing that belongs is indefinite, while the other noun is definite.

Study these examples well. Do you see the patterns? Also, open the link to the interactive lesson and listen to the audio for each example. Try to repeat what you hear. This way, you will start to develop your listening and speaking skills. To further enhance your grammar skills, you will need to practice. In the following image, you will see empty templates, where we removed the noun “book” and its equivalent from the examples. Now it is your turn to try new words. Use the words indicated above, as much as you can, to build new noun phrases.

What about feminine words?

As you may know, nouns in Arabic have gender: either male or female. In the examples above, noun phrases were based on the noun “book”, and other nouns of male gender in the exercises. Does it make a difference if we use a word of feminine gender? Yes it does. First, for a feminine word, the adjective has to be also feminine. In many cases, we do this by adding taa2 marbootah (this letter: ة ـة , a letter that sounds as “h” at the end of the word).

Now you get the idea. The only prominent difference involves words ending with taa2 marbooTah. If such words have a possessive suffix, this taa2 marbooTah becomes a normal taa2, in both writing and pronunciation. However, in case of genitive, where the word for the thing that belongs is followed by a word for what it belongs to; and in this case, the taa2 marbooTah is still written, but its pronunciation becomes a regular taa2.

Now also do your practice by filling the templates with other feminine words.

It is important to know that Arabic grammar is highly complex. There are different complexities when learning Modern Standard Arabic and when learning dialects, so it is important to learn the differences. There are so many topics which are interrelated and can be tackled on different levels of sophistication. That’s why the focus of our lessons is to go as simple as possible. You don’t need to study dozens of other topics just to learn the topic at hand. Just understand it well, practice it as much as you can, and then it will give you a useful piece of the puzzle, and a useful tool to help you navigate the complexity of the language. Good luck and keep learning! Please leave any questions you have in the comments or on our social media.

Processing…
Success! You're on the list.
Whoops! There was an error and we couldn't process your subscription. Please reload the page and try again.